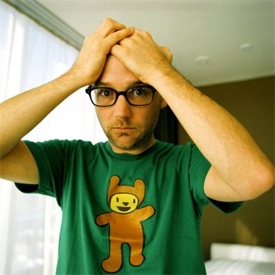 "I grew up playing classical music, but I've always loved electronic music, because it always to me sounds like the future."
Advertisement:

Richard Melville Hall (born September 11, 1965), better known as Moby, is one of the most respected Electronic Music artists in his field. He's known for his strikingly diverse body of work, often characterized by touching synth orchestrations and heavy sampling of vintage folk, blues and gospel music, with the occasional Alternative Rock song.

While he began as a Punk Rock musician in the early 80s, he transitioned to electronics in the later half of the decade, carving out a niche for himself in the techno scene of the early 90s (mainly off of his hit song "Go") before his first widespread success came in 1995 with the Genre-Busting Everything Is Wrong, earning him acclaim and spots on big American tours like Lollapalooza while also proving there was more to his musical identity than a four-on-the-floor beat.

A year later, due to his frustration with the dying rave scene, the general public's dismissal of techno, and life in general, he attempted to return to his punk roots and tailor himself to the then-thriving alt-rock scene with the album Animal Rights. It was a massive critical and commercial disappointment, heavily alienating his accumulated fanbase, turning him into a music media laughingstock, and pretty much single-handedly undoing all of the success he'd earned up to that point. (Ironically, this was right around the time other electronic acts like The Prodigy and The Chemical Brothers were achieving more mainstream success themselves. Meanwhile, the album's reputation would slowly improve in the ensuing decades.)

After a three-year downward spiral of alcoholism, he released what he assumed would be his last album, Play, a record based around the then-novel idea of building breakbeat and downtempo songs around field recordings of blues, folk and roots songs (similar to contemporaries DJ Shadow and Thievery Corporation). Though critics and audiences were still too busy laughing at him for Animal Rights to take notice at the time, the album eventually became a massive success, making history for being the first (and possibly only) album to have every single song be licensed for use in television, films and commercials, with some songs being licensed multiple times outside of America, and eventually becoming one of the best-selling albums of all time. What everyone had assumed would be Moby's Swan Song (including Moby himself) ended up propelling him to rockstar status.

Moby's follow-up album, 2002's 18, was the beginning of the second phase of his career. Eschewing the genre-defiant eclecticism of his previous body of work, Moby began focusing almost entirely on making downtempo/chillout music based around samples of existing guitar-based recordings. While 18 was mainly a retread of Play, other albums saw experimentation with guitars and pop songcraft (Hotel), dance music (Last Night) and ambient music (Long Ambients).

In 2016, Moby briefly changed direction again with a pair of energetic electronic rock albums, These Systems are Failing and More Fast Songs About the Apocalypse, largely informed by the cultural and political climate of America at the time. The albums were surprisingly well-received — two decades after Animal Rights, Moby finally got some decent reviews for dabbling in rock music.

That same year, he published his first memoir, Porcelain, which covered his early life up to just before the release of Play. A second memoir, Then It Fell Apart, covering the post-Play years, was released in 2019.

Nowadays, Moby is more of a cult figure than the major player he once was, but his legacy as an innovator in electronic music and respect as a songwriter has earned him the license to more or less do whatever he wants.

Prior to Play, Moby's music had previously broken a Guinness World Record for fastest recording ever with "Thousand" (take a wild guess how many BPM it is). Other notable songs of his include "Extreme Ways," the official unofficial theme song to The Bourne Series, and his only US hit, "South Side," a duet with Gwen Stefani.