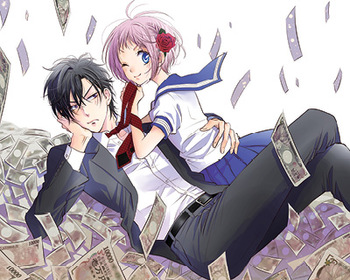 Takane & Hana is a manga by Yuki Shiwasu and was published monthly in Hana to Yume from 2015 to 2020.

After her older sister refuses to attend an arranged marriage meeting set up by their father and the head of his company, 16-year old Hana Nonomura steps up and pretends to be her for his sake. But the meeting goes sour when she actually meets the head's grandson and heir to the company, 26-year old Takane Saibara. Right off the bat, he acts like a Jerkass to her and calls her a gold digger. The assertive Hana responds by throwing her wig at his face and leaving. Because nobody had ever stood up to him like that before, Takane is immediately interested in her. And while Hana is initially annoyed by his advances, she eventually develops a soft spot for him. The duo decide to enter a courtship to best the other, which results in the developing Love-Hate Relationship between the Tsundere Takane and Little Miss Snarker Hana.

The series became popular enough that it received a live-action drama series that began airing on Fuji TV on March 18, 2019. It also received a few audio dramas released with some of the volumes.