Tabletop Game / Beyond The Gates 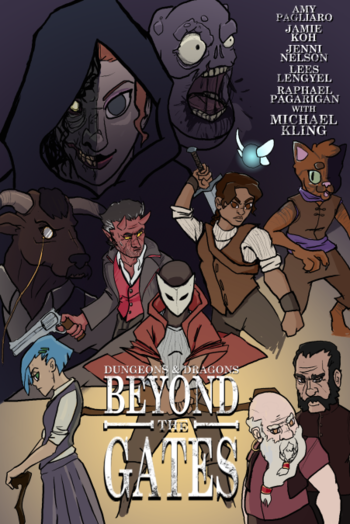 Beyond the Gates is a tabletop campaign played using Dungeons & Dragons 5th edition. It takes place in Pariah, a fantasy realm still on its knees after a buried god resurrected and left the world in ruin.

The first arc is a slightly modified version of the "Sunless Citadel" module that follows four adventurers—Eibe, Cheeto, Opal Beetle, and Meechee (no, not that one.) through the harrowing delve. As they embark on their first adventure, they form unlikely bonds, phobias, and kill a lot of goblins.

The second arc picks up as the party returns to Fogreach, the last great city of Pariah. Their peaceful return is put on hold almost immediately when they run into Jeri, a soldier-turned-spy for the vast criminal underbelly plaguing the city.

Above Good and Evil: Cheeto conducts her work this way. Altruism and necromancy are a tough mix.

After the End: The setting, Pariah, is a post apocalyptic fantasy world. Unknown to its inhabitants, the continent doubled as the grave of a dead god. When it woke up, things got... messy. This is referred to as "the ascension" by those who survived.

Anachronism Stew: The world of Pariah is all screwed up- The city of Fogreach is a fully functioning 1920’s era metropolis, complete with automobiles, heavy industry, and public transportation. It’s neighbor is an ancient buried citadel just on the outskirts of the city where the highest form of technology is a crossbow.

Affably Evil: Midas is a pretty genteel fellow and won’t hesitate to banter with whomever he’s beating to a pulp. He’s also really sorry for torturing you- in another life, you might’ve been friends...

Artifact of Doom: The Gulthias fruit. Nobody knows exactly what it does, but the fruit from an evil pseudo-sentient tree that feeds on blood and misery being fought over by every evil mage in the city can’t be good.

Back-to-Back Badasses: Cheeto and Meechee during the fight with Belak.

Bad Black Barf: With a name like Gor the Corpse Glutton, one can expect this. The rotting undead giant would vomit zombies, spewing much of this trope whenever doing so.

Black Magic: While necromancy isn’t inherently evil, it is the brand of magic responsible for Gor and the Gulthias tree.

Break the Cutie: Beetle only wants to be friends with everyone she meets. Cut to parental abandonment, Durnn impaling Meechee while he and Beetle have a kindly chat, barely escaping Ysira and dragging an unconscious Cheeto through the woods, starting a factory fire that may have killed a bunch of her fairy friends, and most recently getting mauled and disfigured by an undead mob. Oof. She has yet to snap.

Chase Fight: When the group reunites after being captured by the Hucreles, the two parties engage in a destructive multi-vehicle pursuit through the streets of Fogreach.

Cliffhanger: Meechee’s near death and the last-minute appearance of Ysira are strong examples.

Cool Mask: Eibe constantly wears a wooden mask to conceal their face, only removing it when shit gets real.

Cool Sword: Meechee’s Shatterspike. She blew up a car with it, you know.

Cute Kitten: Opal Beetle is the embodiment of this.

Darker and Edgier: The Fogreach arc has proven to be much harsher on the party compared to the action-fantasy romp of the Sunless Citadel. The party is constantly thrown on the backstep whenever they face Ysira’s gang, and the slow unveiling of each character’s history casts them in a more tragic light.

The Dragon: Midas. Durnn was this to Belak before Beetle inspired his Heel–Face Turn with a one-two punch of bardic magic and a concussion.

Evil Duo: Baba Ysira and Midas. Ysira plays the superego, masterminding an endlessly intricate web of schemes, debt, and duplicity as matron of the Hucrele Family. Midas is the id, his genteel facade falling away the instant weapons are drawn.

Fantastic Drug: Fairy dust, apparently. The Hucrele's had the market cornered until the party blew it up. But not before Beetle bumps a line or two at Lady Hucrele's party.

Fantastic Flora: All over the place. Belak’s grove full of sinister mind control plants, the centerpiece of which is the odious Gulthias Tree. Much of the Grimwood is this, as well.

Faux Affably Evil: Lady Hucrele/Baba Ysira. While disguised, she went to great lengths trying to convince and bargain with the party over the Gulthias fruit. That pretense went away with the human disguise, though.

Final Boss Preview: The casino brawl with Midas and his thugs. Nobody was seriously injured, but it took the whole party to keep Jeri on his feet as he went one-on-one with the minotaur.

Freudian Trio: Meechee, Cheeto, and Eibe fit this mold. Meechee is the id, acting purely on emotion and self-interest. Cheeto is the superego, having expressed no moral component to her study of necromancy, even going so far as to plant a sapling of the Gulthias tree for research. Eibe is the ego, being consistently the most levelheaded of the group as well as its moral anchor.

Great Offscreen War: The war between the dwarves and humankind ended roughly 20 years prior to the start of the campaign. The former were displaced after the ascension, and the latter weren't thrilled about sharing the land they just settled with the nation that gave it to them.

Green Thumb: Eibe and Belak are both druids, and thus this trope makes up most of their respective repertoires.

The Gunslinger: Jeri's weapon of choice is the revolver he carried throughout his time in the dwarf-human war.

Hoist by His Own Petard: Belak tries to fire-blast Eibe while their back is turned. It does not go as planned.

Impaled with Extreme Prejudice: So far, at least once per season. Meechee in the battle with Durnn. Later, Cheeto via a lightning bolt sucker-punch from Ysira.

Kill It with Fire: Eibe, increasingly so as their powers continue to develop. Played straight and subverted by Zuric, who uses his brand of fire magic chiefly to heal, though he's no stranger to a good fireball.

Lesbian Jock: Meechee. Despite being the party rogue, she's the physically strongest of the bunch.

The Lost Woods: The Grimwood that separates Fogreach from the rest of Pariah is home to a vast host of magical floraand fauna.

Mushroom Samba: Happens to Eibe and Beetle... in the middle of a farmer's market.

Team Dad: Jeri is an actual father, but only shows shades of this toward the younger party members. Scratch and Zuric play the trope straighter (ha), and have growing mentor relationships with Meechee and Eibe, respectively.

Swallowed Whole: Happens so frequently that it’s become a Running Gag. Even stranger, the one doing the swallowing has been a different giant frog monster every time...

Trauma Conga Line: Jeri. He's a war veteran whose wife and kid left him after he incurred a large gambling debt. He's an alcoholic and sometimes a spooky voice in his head tells him to do bad things. The first time the party meets him, he's forced into a fist fight with a minotaur, knocked unconscious, and then tortured within an inch of his life by said minotaur. Ouch.

Wham Episode: The party's first adventure to the Sunless Citadel is going pretty well, until they meet Durnn and he impales Meechee, then throws her unconscious body down a pit for good measure.The group returns to Fogreach as guests of honor for Lady Hucrele's grand reopening of the Beggar Prince. the night ends with the party divided, beaten, and taken away by her thugs to be tortured for information. Oh yeah, and Lady Hucrele is actually a hag named Baba Ysira.The Bloodwell two-parter. Eibe realized the bloodwell was because of the factory fire they caused. Jeri's ex-wife was captured. The battle with Gor nearly killed Eibe and Beetle, leaving a beaten Meechee and Jeri left in the middle of the zombie-infested city… and then Ysira and Midas appear out of nowhere. For good measure.

Wham Line: Ysira, appearing after the party is beaten nearly to death by Gor, “Well, now that I have your attention…”

What Kind of Lame Power Is Heart, Anyway?: Beetle’s bardic magic may seem underwhelming when facing an undead horde or escaping a car chase, but her supernatural charm has been the defining factor in saving the party from a bunch of bad situations. She currently has a flawless record of swaying The Dragon to her side, having inspired a Heel–Face Turn from Durnn and even earning a genuine fan after performing for Midas.