Manga / There, Beyond the Beyond 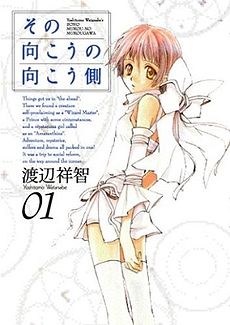 There, Beyond The Beyond (Sono Mukou no Mukougawa) is a Shōnen manga by Yoshitomo Watanabe, which was serialized in Comic Blade from 2004 to 2008 and collected into six volumes. The first four volumes were translated into English by Tokyopop as Beyond the Beyond, but the series was then dropped due to lack of sales. Chuang-Yi in Singapore translated the first five volumes into English using the translated Japanese title, but they ran into licensing problems and were unable to release the last book.

The story starts when twelve-year-old Futaba Kudo is transported to another world by Kiara the Amaranthine, a "flower from the Beyond" who wields supreme magic power, when she mistakes him for her master. Because she cannot perform magic without him, Futaba promises that he will help her to find her true master, and in return she will use his power to send him home.

During their travels, the two gain the companionship of Lord/Lady Belbel (depending on the translation) and the "Mad Prince" Virid Viridian. Belbel is a powerful magician in the form of a bejewelled bunny-creature, who acts as Futaba and Kiara's Mr. Exposition and guide. Prince Virid rebels against his fate after befriending Futaba, and is avoiding his identically-named, sane twin brother who he is destined to Duel to the Death to become king. Both act to protect Futaba and Kiara from those bent on capturing or killing the Amaranthine for her power.

Not to be confused with the PlayStation RPG Beyond the Beyond.