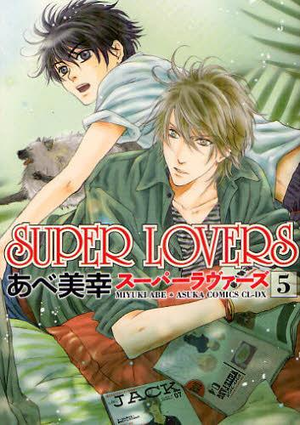 "What are you to me?"
"How should I know??"
Advertisement:

Super Lovers is a yaoi manga by Miyuki Abe.

Haru visits Canada to spend the summer holidays in the woodland house of his strict, strong-willed mother, Haruko. There, she burdens him with the responsibility of caring for his younger adoptive brother - a wild and unruly little boy named Ren who trusts no-one and prefers to wander in the woods with Haruko's dogs rather than associate other people. Haruko orders Haru to 'civilize' Ren.

As the young man strives to teach Ren how to live in human society, their relationship gradually improves - so much so that Haru plans on taking his 'little brother' to Japan with him once he finds a job.

Unfortunately, fate has a cruel habit of interfering with one's plans...

The series was adapted into an anime in April 2016. The second season premiered in January 2017.