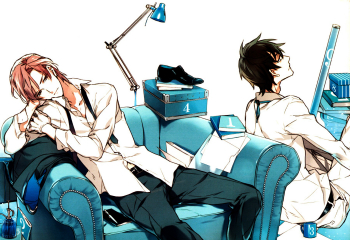 Shirotani & Kurose
"Do you want to reject me or be tainted by me?"
— Kurose Riku
Advertisement:

Ten Count is a Yaoi manga series written and illustrated by Takarai Rihito, which was serialized in Dear+ magazine from 2013 to 2017 and compiled into six volumes.

The story follows Shirotani Tadaomi, a secretary with mysophobia, who meets Kurose Riku, a clinic counselor who was able to diagnose Shirotani accurately on their first meeting. After their second run-in, Kurose decides to help Shirotani with his affliction by way of exposure therapy. Kurose has Shirotani creates a list of nine things he has trouble with due to his condition, leaving number ten blank. Shirotani and Kurose begin going through this list one by one...

Because Kurose offers to help him at no cost, Shirotani is initially suspicious of his motives, but Kurose asks that his only payment is for Shirotani to become his friend and that he'll reveal his reason for helping Shirotani once he writes down the tenth item.

Tropes present in Ten Count include: