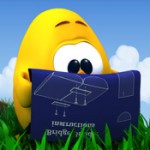 Oh nee... de instructies niet in het Nederlands...
"This probably isn't a normal egg!"
—The opening of the first game (while Toki Tori is hatching)
Advertisement:

Toki Tori is a Puzzle Platformer originally released for the Game Boy Color in 2001, then remade for the Pocket PC, then getting an Updated Re-release (or several), all brought to you by Two Tribes.

Toki Tori's premise is straightforward. Using a limited number of tools (ranging from the suitably named Freeze-o-matic to the unimposing Bubble Suit), Toki Tori has to gather up his lost and unhatched brothers and sisters.

The game has developed something of a cult following, helped in large part by its multiple re-releases, in particular its 2010 Steam release, which added a Level Editor so that fans could finally put together their own Easter egg hunts.

A sequel was released in April 2013 on Wii U eShop, with a Steam version released in July 2013. It is much more ambitious than its predecessor, with big worlds and some Metroidvania elements. Tools have been replaced by manipulating the environment (creatures, nature, artifacts, etc.) to help you explore the levels and collect tokens instead of eggs.