A list of characters and tropes from the Tomb Raider series. For characters from the 2013 Continuity Reboot, see this page. 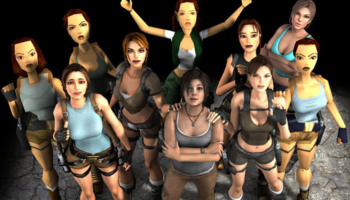 The many faces of Miss Croft

A British archaeologist who has a knack for descending into trap-riddled tombs and ruins, and loves every bit of it. Armed with her wits and her trusty dual pistols, Lara uncovers secrets across the globe stopping at nothing to get what she wants.

Two continuity reboots have led to three radically different Laras. Here are the tropes that each Lara generally possesses:

And here are the tropes each of Lara's iterations feature: 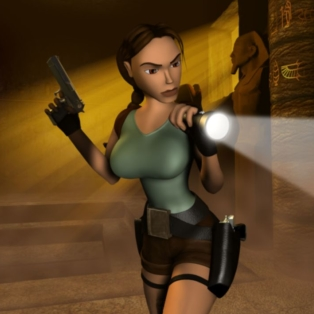 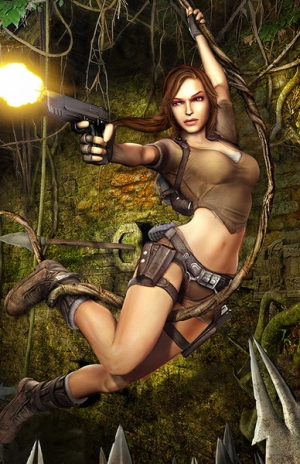 Although not as inclined to venture out into the world, these two lads accompany Lara on her journeys via headset and can provide a wealth of information, should she require it. They are not shy of commenting on some of Lara's riskier behaviour, but are genuinely fond of her and support her in her endeavors.In Underworld, Alister dies when he, while trying to escape the burning mansion, unwittingly steps into the line of fire of Lara's Doppelgänger.

Anaya Imanu
An old friend of Lara's, she unwittingly sets off the events of Legend when providing Lara with a crucial tidbit of information. Grounded in reality, she prefers to think about the future, rather than dwell on past events.
Totec
The Guardian of Light, and second player character in the game Lara Croft and the Guardian of Light. Totec battled the god Xolotl eons ago, and managed to seal him away using an artifact called the mirror of smoke. In the present, both are once again unleashed when Lara is strongarmed by criminals into locating the mirror, inadvertently starting Totec and Xolotl's war over again.
Carter Bell
Another archaeologist and rival to Lara Croft.

Jacqueline from the Legend Continuity.
Originally posing as a mysterious, yet powerful businesswoman, Jacqueline Natla is one of Lara Croft's more frequent enemies. She is actually millennia old and a former ruler of Atlantis, exiled to limbo for creating mutant monsters to wipe out and replace the existing biosphere (including human civilization). Intimidatingly intelligent and capable of things far beyond that of any normal human, Natla, as an opponent, is never to be underestimated. Fond of playing people like puppets and hatching plans that inevitably lead to The End of the World as We Know It. Also particularly resistant to dying.
Larson Conway

One of Natla's mercenaries, Larson Conway has crossed paths with Lara Croft on more than one occasion. In the Crystal Dynamics continuity, he does display a genuine fondness for Lara, despite their often conflicting interests, and is rather reluctant to actually hurt her. Later, he mistakenly provokes Lara into shooting him when he claims she's not the kind of person to kill the people that stand in her way. His death has a profound effect on Lara, being her first human kill.

A French archaeologist that, despite presenting himself as legit, is more of a glorified treasure hunter. Recently having come under the employment of Jacqueline Natla, Pierre DuPont finds himself opposite the infamous Lara Croft once more, this time, in pursuit of the same artifact as he. In Anniversary, although he briefly manages to take a hold of the artifact, the guardian centaurs prevent him from escaping and kill him shortly thereafter.

Once a small-time gang leader in Los Angeles, The Kid came under Jacqueline Natla's employment quite unwillingly. A failed carjack attempt of the businesswoman's limousine led to the elimination of the entire crew, barring Kid himself, who was spared because he could prove himself useful. Now working alongside the murderer of his blood brothers, The Kid begrudgingly carries out Natla's orders, which eventually brings him face to face with Lara Croft. Dies of a stab wound inflicted by Kold.

A large African-American henchman, this frighteningly vicious killer takes care of any threats with ease, and relishes in it. He was released into Jacqueline Natla's custody as her personal bodyguard, despite protests from the prison psychiatrist. Takes a lot of bullets from Lara, but eventually goes down after The Kid shoots him in the back. 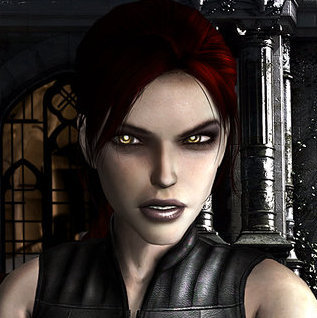 The Doppelganger in Underworld

A creature of supernatural origin that Lara Croft has encountered multiple times, though in different forms. The first Doppelganger was an Atlantean creation that could mimic Lara's movement flawlessly, essentially being a mirror image. Recognizing this crucial flaw, Lara tricked the creature into jumping into a lava pit, its blind mimicry leading to its death.

The second Doppelganger, possessing great strength and speed, poses a far greater threat than the original Doppelganger ever could. Unlike the original, she has a humanesque appearance that is uncannily similar to that of the real Lara Croft. She carries out Natla's orders without question, but a desire to break away from the Atlantean Queen's control sometimes makes itself apparent. Most, if not all, of these tropes below apply to her.

The main villain from Tomb Raider II. Bartoli is the son of the occultist Gianni Bartoli and the leader of Fiamma Nera, an Italian mafia organization/occult cult. He wishes to acquire the Dagger of Xian in order to use it to become a dragon.

Tony
A researcher from the research and mining company RX- Tech working for Dr. Mark Willard. Lara meets him in India and he appears to be a bit deranged right from the first meeting.
Puna

A leader of a Cannibal Tribe from unspecified island somewhere near Borneo. He uses the powers of his shard of the meteorite to play god/high priest of his people.

A scientist working for the research and mining corporation RX-Tech, heading up an excavation in the Antarctic. Dr. Willard starts as an Enigmatic Minion in Tomb Raider III, getting Lara enrolled on her search around the world for the pieces of the meteorite he needs for unspecified reasons. His role as a villain doesn't kick in until the final stage of the game, where he shows his true colors.

Set
An Egyptian god, trapped for millenias in a magic sarcophagus and accidentally released by Lara during her new adventure in Egypt. He quickly starts to unleash chaos over larger and larger areas, while the clocks are ticking to the turn of the millenium...
Verdilet
A demon/ghost trapped on an island somewhere close to Ireland.
Pieter Van Eckhardt

A 15th Century alchemist, Eckhardt is the founder of the Cabal order whose goal is to revive the Nephilim race from extinction and assume power over the world.

Gunderson is a member of Eckhardt's Cabal order, serving as Eckhardt's personal bodyguard. Very little is known about his background.

Boaz is a member of Eckhardt's Cabal order. She originates from Argentina, and becomes the Head of Corrective and Remedial Surgery in Prague.

Karel is a member of Eckhardt's Cabal order and his accomplice. He is the one who killed Werner Von Croy.

An old friend of Lara's, dating back to their student days, whom she occasionally bantered with, due to their differing viewpoints on social anthropology. Her life was tragically cut short however, when a malevolent entity appeared during an excavation and slaughtered the entire team of graduate students, barring Lara, who managed to escape. Eventually revealed to have survived, Amanda, embittered by the fact that she was left behind, is now a formidable adversary and often in pursuit of the same artifacts as Lara Croft.

A Yakuza boss being in possession of a first piece of Excalibur Lara wants for herself.

An Aztec God associated with Death and Decay, Xolotl sought to plunge the world into darkness, but was opposed by Totec. Millenia later, both were once again free to roam the Earth, with Xolotl again seeking to destroy the world.