Film / Hector and the Search for Happiness 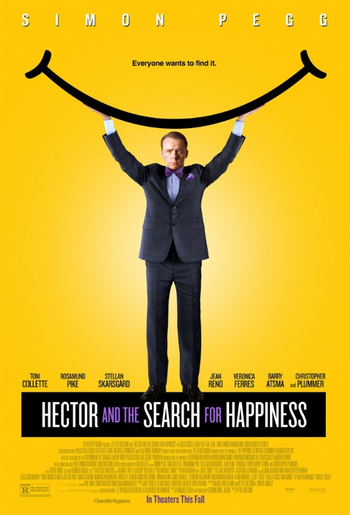 "We should concern ourselves not so much with the pursuit of happiness, but with the happiness of pursuit."
— Professor Coreman
Advertisement:

Hector and the Search for Happiness is a 2014 British-German-Canadian comedy-drama film starring Simon Pegg, Rosamund Pike, Jean Reno, Toni Collette, Christopher Plummer, and Stellan Skarsgård. It was based on a 2002 novel by Francois Lalord.

Hector is a London-based frustrated psychiatrist that is unable to take pleasure in his "satisfactory" life and disillusioned with the tedium of his existence. He confesses to his girlfriend Clara (Rosamund Pike) that he feels he is a fraud for dispensing recommendations to patients who never seem to improve or get any happier.

Wanting to break out of his lackluster routine. Hector gives his starved curiosity free rein and embarks on an international quest to find the right formula to bring him joy and vitality.