Film / House at the End of the Street 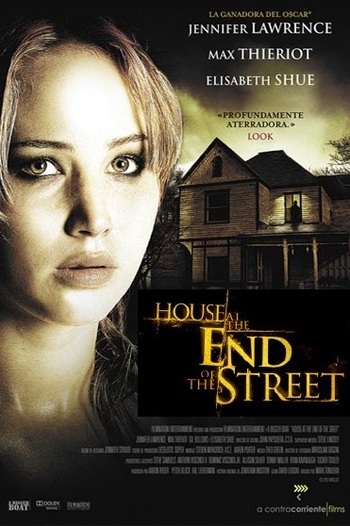 House at the End of the Street is a 2010 horror movie directed by Mark Tonderai and starring Jennifer Lawrence (made between Winter's Bone and The Hunger Games but released after both of them, in 2012).

The film stars Lawrence as Elissa, a young woman from Chicago who, along with mother Sarah (Elisabeth Shue), move into a dirt-cheap fixer-upper in a quaint suburban neighborhood. However, not all things are what they seem in this neighborhood, especially when the two hear of the story behind a young daughter murdering her parents in a house close to where Elissa and Sarah now live. After murdering her parents, the daughter subsequently vanished, leaving behind her brother Ryan (Max Thieriot) as the only survivor. Much to Sarah's chagrin, Elissa starts falling for Ryan, and things begin to reach scary new heights when the two continue with their relationship.