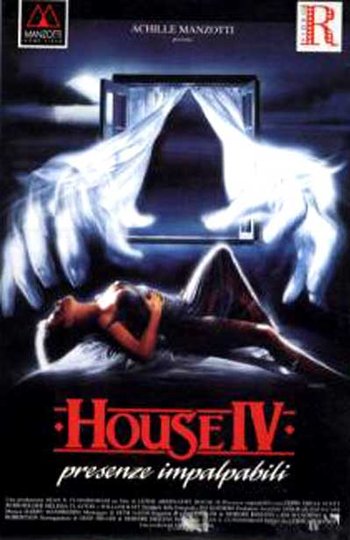 The last sequel in the House film series, released in 1992 straight-to-video.

The film opens with Roger Cobb (yes, the protagonist of first film) and his family checking out the house his father left him with. Roger's step-brother Burke tries persuade him to let him have it for making some profit, but Roger decides to keep the house as it is due to an old promise made by his ancestor to the local Native Americans. But on the way back home, the Cobb family's car crashes and Roger is engulfed in flames. Some time later his wife Kelly and daughter Laurel move to the old house, deciding to start a new life in there. But Burke is hellbent on getting the property, and seeks to drive them out. The supernatural forces rampaging in the house doesn't help matters either.

House IV has the examples of: