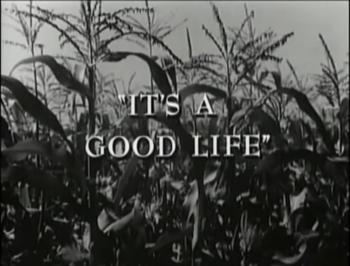 Boy, is it ever.
Rod Serling: Tonight's story on The Twilight Zone is somewhat unique and calls for a different kind of introduction. This, as you may recognize, is a map of the United States, and there's a little town there called Peaksville. On a given morning not too long ago, the rest of the world disappeared and Peaksville was left all alone. Its inhabitants were never sure whether the world was destroyed and only Peaksville left untouched or whether the village had somehow been taken away. They were, on the other hand, sure of one thing: the cause. A monster had arrived in the village. Just by using his mind, he took away the automobiles, the electricity, the machines—because they displeased him—and he moved an entire community back into the dark ages—just by using his mind. Now I'd like to introduce you to some of the people in Peaksville, Ohio. This is Mr. Fremont. It's in his farmhouse that the monster resides. This is Mrs. Fremont. And this is Aunt Amy, who probably had more control over the monster in the beginning than almost anyone. But one day she forgot. She began to sing aloud. Now, the monster doesn't like singing, so his mind snapped at her, turned her into the smiling, vacant thing you're looking at now. She sings no more. And you'll note that the people in Peaksville, Ohio, have to smile. They have to think happy thoughts and say happy things because once displeased, the monster can wish them into a cornfield or change them into a grotesque, walking horror. This particular monster can read minds, you see. He knows every thought, he can feel every emotion. Oh yes, I did forget something, didn't I? I forgot to introduce you to the monster. This is the monster. His name is Anthony Fremont. He's six years old, with a cute little-boy face and blue, guileless eyes. But when those eyes look at you, you'd better start thinking happy thoughts, because the mind behind them is absolutely in charge. This is the Twilight Zone.
Advertisement:

The town of Peaksville, Ohio is home to an omnipotent child named Anthony Fremont. He can change anything he wants and banish anyone he wants into the cornfield.

The town gathers to celebrate "television night" in which Anthony makes television for everyone and to celebrate the birthday of Dan Hollis. However when Dan dips too much into booze, he ends up thinking some very bad thoughts.

For tropes on the original short story, see It's a Good Life.

It's a good thing that we're going to list the tropes here:

Rod Serling: No comment here, no comment at all. We only wanted to introduce you to one of our very special citizens, little Anthony Fremont, age 6, who lives in a village called Peaksville in a place that used to be Ohio. And if by some strange chance you should run across him, you had best think only good thoughts. Anything less than that is handled at your own risk, because if you do meet Anthony, you can be sure of one thing: you have entered the Twilight Zone.

It's a good thing we didn't forget to list the tropes in various other adaptations of this work. It's a very good thing:

open/close all folders
Twilight Zone: The Movie
The third segment of Twilight Zone: The Movie is a loose adaptation of this episode. On a long road trip to a new home, a schoolteacher named Helen Foley meets Anthony, who in this version is ten years old and has the ability to venture outside of his isolated realm and into the wider world. He invites her to come home with him, where she discovers his supernatural nature and the dire consequences it has had for him and the people around him.
It's Still a Good Life
Forest Whitaker: Forty years ago, Rod Serling introduced us to a monster, a monster so powerful he was able to make the world disappear just by using his mind. For the residents of Peaksville, Ohio, the nightmare had begun. The monster knew their every thought, could feel their every emotion; and when they made him angry, which was often, he would banish them into a cornfield from which there was no return. And the most frightening thing about this monster was that he was only six years old. Now it's forty years later, and the people of Peaksville are still in Hell. Oh, yes, there's one other thing: The monster now has a child of his own, and though she possesses none of her father's powers, he still loves her very, very much.

The 2002 revival series produced a direct sequel to It's a Good Life, starring Bill Mumy and Cloris Leachman reprising their roles. Having grown to adulthood without any limits on his power or challenges to his self-centered worldview, Anthony has become set in his monstrous ways, and the people of Peaksville continue to live in fear of his volatile temper. The only person to whom he shows a kinder aspect is his daughter, Audrey (Liliana Mumy). When Anthony's mother realizes that Audrey has inherited her father's powers, she sees an opportunity to end Anthony's reign, but things don't go according to plan.

No lesson to be learned here. No morals to be taught. Just an update from Peaksville, Ohio, where Anthony and Audrey Fremont want you to think happy thoughts, and you better do as you're told. Otherwise, you might wind up in that cornfield known as The Twilight Zone.

It's still very good we split this page off. A very good split.
Feedback