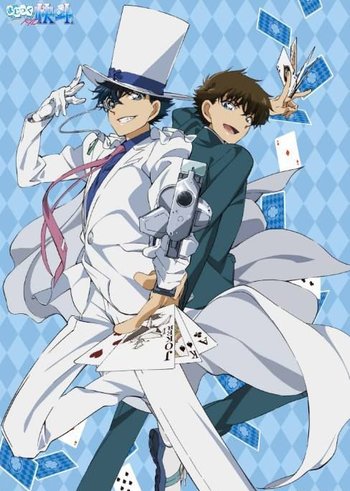 Magic Kaito of the Protagonist Title. Eight years after his father's death, he discovers his father's identity as the original Kaitou Kid and later takes on the role himself in order to search for the gem called Pandora and stop the people who murdered his father from obtaining it.

While not under the guise of Kaitou Kid, Kaito seems to be rather popular in school and likes to pull harmless pranks on people. He also loves to demonstrate his magic skills and seems to hate seeing other people upset. While good at many things, he is absolutely hopeless at ice skating, and has an unexplained extreme fear of fish.

In Detective Conan, his main job there is just to be a recurring adversary every now and then, but otherwise he isn't an important part of the story. Chapter 824, where he helps Conan fool the Black Organization into believing Shiho Miyano is dead, is the first time he explicitly takes part in a major Detective Conan plot. Until chapter 1008 retroactively recast his third canon appearance—chapters 299-302, the Sunset Mansion murder case—as the debut for Detective Conan's Big Bad, with KID having been used as bait to lure detectives in to investigate the Black Org's very earliest known murders—though no one realized this at the time.

Mandatory naming note: He's got a huge number of layers here. Kuroba means '"black feather" - referring to flight and likely to his black hair, as well as Kid's apparent alignment according to the police. The name also possibly references magpies (birds who horde shiny objects). In a sense it is an ironic name since the Kaitou Kid is otherwise usually associated with white birds like doves. Kaito is a pun on both "kaitou" and the English "kite", which matches the appearance of his hang glider and once again refers to flight. The name Kuroba deliberately has 'black' in it as the majority of characters in Magic Kaito had colour-themed names. Still another point for the name is that 'clover' is spelled 'Kuroba' in Japanese- Kaito's monocle has a clover on it and Four-Leaf Clover are considered a sign of luck in Japan, like in the West. 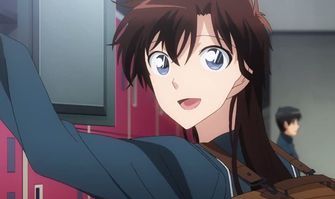 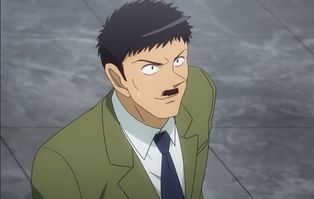 Aoko's father, a police inspector who's been obsessed with catching Kaitou Kid since the original's heyday. Fancies himself a Worthy Opponent, typically ends up a lot further down the competence (and dignity) spectrum. 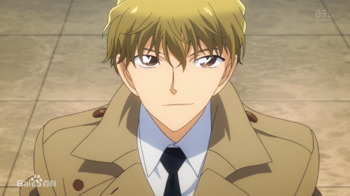 A half-British teen detective, already renowned in Europe and now determined to catch the Kaitou Kid. Something of a prototype for Shinichi Kudo, which naturally led to him making some guest appearances over in Detective Conan.

Mandatory Naming Note: His Colourful Theme Naming is white (Haku). His given name Saguru is an Alternate Character Reading for the tan in tantei, or detective. 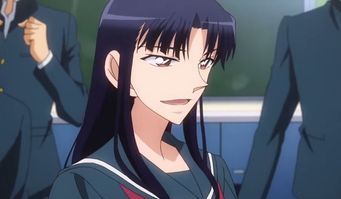 A teenage witch who has zero qualms about using her vast magical powers to bend every boy in sight to her will, and takes a certain interest in the one man she can't instantly charm: Kaitou Kid. Pretty much the the Veronica to Aoko's Betty, much to Kaito's chagrin.

Mandatory Naming Note: Her Colourful Theme Naming is red (Aka). 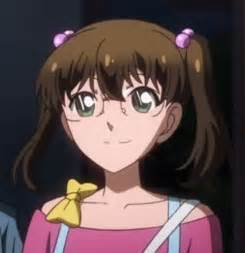 Aoko's closest (if not only) girl-friend, and a common source of school gossip. 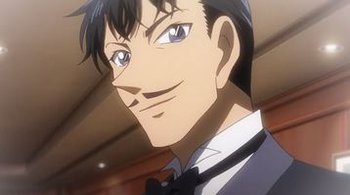