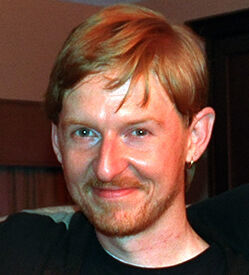 If Funimation is doing a dub starring Kappei Yamaguchi instead of The Ocean Group, they'll hire this guy.

Yup, Jerry Dean Jewell (born July 30, 1976 in McAlester, Oklahoma) is the voice behind Shinichi "Jimmy" Kudo in Case Closed, who is previously voiced by Kappei-kun. Other notable characters from him include Kyo Sohma in Fruits Basket, Akito Hayama in Kodocha, Barry the Chopper/Number 66 in Fullmetal Alchemist and Fullmetal Alchemist: Brotherhood, Suzaku and Jin in YuYu Hakusho, Rin Tsuchimi in SHUFFLE!, Claire Stanfield in Baccano!, and Victor Nikiforov in Yuri!!! on Ice.

Also the current voice of Kaworu Nagisa in Rebuild of Evangelion. Has been playing a lot of bishonen villains since YuYu Hakusho even to this day. He also plays Russia (Ivan Braginsky) in Hetalia: Axis Powers. He's also a good singer, as proven when he sang the ending

for the dub of Dragon Ball Z Kai.