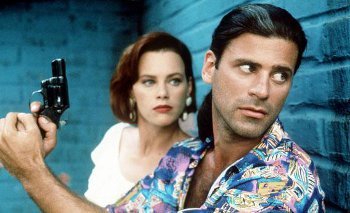 Tropical Heat (AKA Sweating Bullets) is a 1991 Canadian action series, best known for being Rob Stewart's breakout role. It ran for a total of 66 episodes across 3 seasons.

The series deals with the cases of former DEA agent Nick Slaughter (Stewart), who moves to the fictional town of Key Mariah in Florida and opens a detective agency with the help of tourist agent Sylvie Girard (Carolyn Dunn). Being the organized one, Sylvie becomes the secretary and manager of the agency whereas Nick focuses on the action part. When he isn't working, the pony-tailed detective can be found hanging out at the Tropical Heat Bar, property of his best friend and ex-rock-star Ian Stewart. It happens to be located at the island's paradise beach and is conveniently populated by pretty girls in light clothing. In later episodes, the bar is owned by Spider Garvin, who also becomes a friend of Nick's.