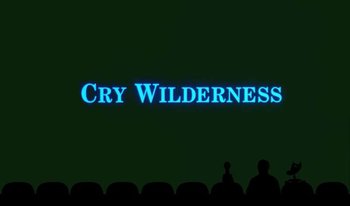 "Well, if you insist... WILDERNESS!"
Kinga Forrester: Now, your experiment today takes the majesty of the natural world, and just kinda jumps on it.
TV's Son of TV's Frank: Hope you like stock footage and incomplete Bigfoot costumes!
Advertisement:

During Turkey Day '18, both Joel Hodgson and Jonah Ray expressed surprise at how popular Cry Wilderness was with the fandom. In particular, Joel had been expecting Carnival Magic to be the fan favorite.