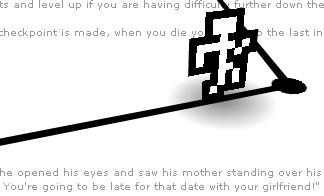 Why does his mother even know that?
Advertisement:

Linear RPG is an Adobe Flash game by Sophie Houlden that reduces linear "role-playing" games to their simplest components.

It can be played online