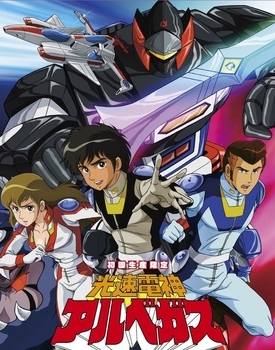 The Super Robot anime Lightspeed Electrogod Albegas (光速電神アルベガス Kousoku Denjin Arubegasu) debuted in 1983 amongst a sea of many robot anime. Had things gone differently for World Events Productions, it would have been formally incorporated into the Voltron mythos.

Three high school kids named Daisaku Enjouji, Tetsuya Jin and Hotaru Mizuki, construct three giant robots named Alpha Robot, Beta Robot and Gamma Robot as part of a school science fair. At the same time, the evil Derringer Empire decides to expand its domain to Earth- which has lived in peace for so long that they barely have any means to repel the invasion. Hence, when the villains begin their attack, Hotaru’s dad, Professor Mizuki, modifies the robots into combat machines that can merge into the Super Robot Albegas to defend the planet.