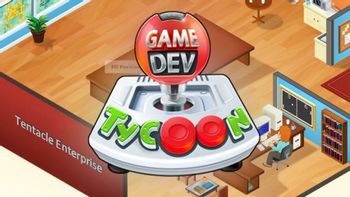 , two brothers from Australia with the goal of making a cheap, fun game that modeled itself after other Tycoon sims, and aimed to avoid certain business practices.
Advertisement:

You start out in the 80's with little more than rudimentary technologies and your own ability; from there, gaming history will unfold, as strangely familiar companies step into the ring or fade into nothingness, while you advance from designing games alone in your garage to managing a big-name gaming giant of your own creation. Success is not easy to come by, however; your consumer base can be cruel, and gaming journalists even more so.

Noted for a particularly creative and Ironic Digital Piracy Is Evil Author Filibuster, where if you pirated the game in Real Life, your in-universe game fails on account of copious amounts of digital piracy.

Available for Windows, Mac and Linux. The Windows and Mac versions were released on Steam (thanks to Greenlight) August 29, 2013 (a separate version for Windows 8 is also available through the Windows Store). They ran into difficulties with licensing of the libraries used by the game on the Linux platform, which not only delayed the release of the Linux version on Steam, but caused the existing pre-Steam versions of the game to get pulled as well (ironic considering that Linux is supposed to be the most liberal platform that they're coding for). The issue was settled in October 2, 2013 and the Linux version was finally released to Steam on the same day.

An iOS port was released in November 2017 and an Android port followed shortly after in February 2018.