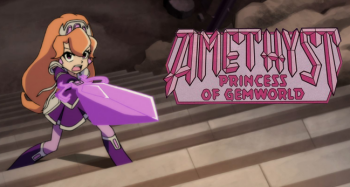 Based on the DC Comics comic book series of the same name, Amethyst, Princess of Gemworld is a 2013 animated series of one-minute shorts created by Brianne Drouhard that ran on Cartoon Network's DC Nation action programming block as one of several other interstitials showcasing lesser-known DC Comics characters.

The shorts follow Amy Winston, an avid teenage game designer. Frustrated that the final level of her most recent creation keeps crashing after the boss completes his monologue, she throws her controller aside... only for one of the characters in her game to start calling out to her. Amy immediately finds herself whisked away to the magical Gemworld, which looks suspiciously like the setting of her game, where she is hailed as Princess Amethyst: ruler of the land and the hero destined to save it from the tyrannical Dark Opal and his forces. While not completely onboard with her new magical girl status, Amy begrudgingly accepts that accomplishing this quest is the only way back to Earth, and sets off on her journey.

Like its fellow DC Nation shorts, all the episodes are available on the official DC Comics YouTube channel, with the Amethyst shorts consisting of seven episodes: "Level 1: Your Quest Begins

The cartoon has the following tropes