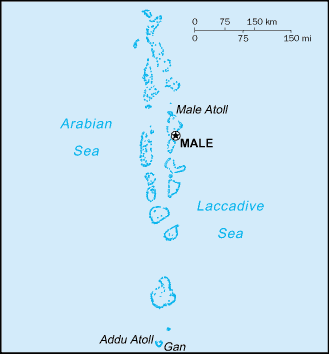 The Maldives, officially known as the Republic of the Maldives (Maldivian: ދިވެހިރާއްޖޭގެ ޖުމްހޫރިއްޔާ Dhivehi Raajjeyge Jumhooriyya), is a South Asian country composed of islands and atolls in the Indian Ocean, southwest of India and Sri Lanka. It is the sixth most densely populated country in the world. It is also the richest state in South Asia; until Sri Lanka recovered from its civil war, it was the only upper-middle income country in the region.
Advertisement:

In the 12th century, the Maldives was converted to Islam during the reign of Dhovemi, who took the title of sultan. The conversion was attributed to a certain Abu Barakat al Barbari. For some time, it was assumed that this fellow came from North Africa, but today's historians agree that "Barbari" didn't refer to Berbers, but rather to the coast of Barbara

in the Horn of Africa, present-day Somalia. The new religion gained traction very quickly and today the Maldivians are devout adherents of Islam; being Muslim is a legal certification for Maldivian citizenship, therefore, freedom of religion is basically nonexistent.

During the colonial era, the Maldives was occupied by three different European states. In the mid-15th century, it was ruled by Portugal (which at the time also controlled Sri Lanka). Then in the 17th century, the Dutch held the islands for four months. By the 19th century, it had fallen, along with most of the rest of the Indian subcontinent, under the control of The British Empire, who turned the islands into a protectorate, administered from Sri Lanka. Throughout these centuries, the Sultan still technically ruled the islands (a situation similar to India's Princely States).

The British started the process of decolonization in the late 1950s, though it signed an agreement to lease the southern atolls for its Royal Air Force base. This was challenged by Ibrahim Nasir, the prime minister elected in 1957, who increased levies so the British would be tempted to leave earlier. Since the southern atolls benefited from the British presence, they declared rebellion and seceded to form the United Suvadive Republic. Unfortunately for them, the British chose to support the central government, and the republic fell in 1963. The islands became an independent Kingdom in 1965, with Muhammad Fareed Didi, the last Sultan, deciding to style himself as "King" upon independence. In 1968, the monarchy was abolished and the islands became a republic. The British left the country for good in 1976. It remains a member of The Commonwealth of Nations, though it briefly left the organization from 2016 to 2020.

From 1968 to 1978, the Maldives was led by Nasir, who instituted a slew of modernization efforts, including a controversial and ultimately failed attempt to change the traditional script to Latin, and the popularization of the country's tourism sector. He was followed by Maumoon Abdul Gayoom, who ruled unopposed for the next 30 years. His presidency saw the Nasir loyalists attempting to overthrow him three times, including a failed 1988 coup that involved the Tamil insurgents from Sri Lanka. After a series of protests throughout the later years of his tenure, he bowed to the people's wills and introduced proper democracy in 2008.

The president from 2013 to 2018 was Abdulla Yameen, Gayoom's half-brother. He was elected after protests that saw the resignation of President Mohamed Nasheed in 2010, which many saw was simply an attempt at power-grabbing. Yameen was a strongman accused of jailing political opponents (including Gayoom) and bringing the country closer to China, which many feared would put it into a debt trap with its Belt and Road initiative. He was surprisingly unseated in the 2018 election by Ibrahim Mohamed Solih, who has started to investigate his predecessor for corruption and rights abuses. Solih's accession was a major sigh of relief for India, since it perceives him as friendlier to its interests in the face of neighbors who are increasingly turning their backs against it.

The script for the Maldivian language looks very strange when compared to other scripts used in the Indian subcontinent. Actually, it's because it's not derived from any kind of Brahmi script, at least not those that are used for alphabets. Instead, (modified) Hindu-Arabic numerals, of all things, serve as its inspiration, complemented by Arabic diacritics to indicate sounds.

Maldives has the lowest high-point of any country on earth – eight feet (just over two meters) above sea level. Considering that sea levels are expected to rise a significant amount over the next century, by 2100 there may not be a Maldives. This has led the government to be an active participant in climate change discussions, and to commit to becoming carbon-neutral by 2019.

One of the mainstays of the Maldivian economy is tourism – no shock considering that the islands are well-known for their lush wildlife and white-sand beaches. The islands were badly hurt by the 2004 Boxing Day tsunami, which caused damage totalling over 3/5 of the country's GDP. The tourist industry has been slowly recovering since.