Literature / The Shadow of the Vulture 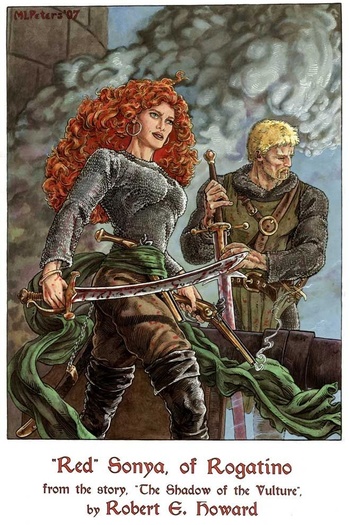 Looking for Conan, a Chainmail Bikini or the Hyborian Age? You're in the wrong place.
Advertisement:

"The Shadow of the Vulture" is a Historical Fiction short story written by Robert E. Howard, the creator of Conan the Barbarian, and published in 1934 for The Magic Carpet Magazine.

It takes place during the Ottoman incursions into Europe in the 16th Century (specifically between the Battle of Mohács and the first Siege of Vienna) and revolves around Knight of St. John Gottfried von Kalmbach and female swashbuckler Red Sonya of Rogatino, who strike up a partnership after surviving the fall of Mohács and trying to escape from the feared Turkish commander Mikhal Oglu, also known as the Vulture, sent by the Sultan to bring him Gottfried's head.

Sonya is notable for serving as the blueprint for Red Sonja, who was created by Roy Thomas for the Conan comics. She debuted in the 1973 Marvel-published Conan the Barbarian issue #23 which adapted The Shadow of the Vulture and setting in Hyboria instead of our Earth, with Vienna being replaced by the city of Makkalet, Gottfried replaced by Conan, Sonya by Red Sonja, Suleyman by Yezdigerd the Turanian Emperor. Mikhal is the only one left unchanged except he is Turanian rather than Turkish.

Can be read online

"The Shadow of the Vulture" provides examples of: