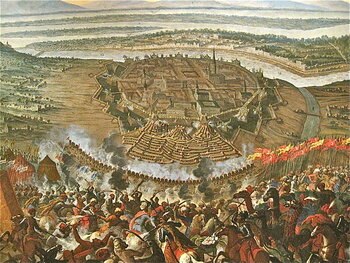 In 1683 the Ottoman Grand Vizier Kara Mustafa marched up the Danube with the objective of conquering the city of Vienna. They laid siege to the city in July. They battered and dug at the hapless city, slowly closing in on the defenders (right before the battle itself, the Ottomans were hoping to breach the walls with a final detonation of multiple mines that the defenders managed to find and disarm). Meanwhile the Hapsburg Emperor Leopold I assembled a coalition including several German princes and the Polish King Jan Sobieski. They attacked the Ottomans at Vienna on September 12, and routed the Ottoman army in a sudden and amazingly successful attack despite having around 2/3rds' their numbers, with the final strike famously performed by Sobieski himself leading over 18,000 horsemen in what would become the largest cavalry charge in all of history, headed by 3,000 of the Winged Hussars. This was to be the last time the Ottoman empire would attempt a major conquest in Europe and foreshadowed later offensives to be launched in turn by the Austrians and Russians which would severely reduce the Ottomans and gain these powers territory in the Black Sea region.

An earlier siege in 1529 by Suleyman the Magnificent is also important historically, and may sometimes be confused with the the later one. Together with the siege of Malta and Battle of Lepanto, it pretty much defined the limits of the Ottoman Empire's reach in Europe and the Mediterranean Sea. Also, there's a few culinary legends involving this battle (though the veracity of them are all dubious) - that the first croissants were made to celebrate the victory, designed after the Ottomans' crescent on their flags; that the first bagel was gifted to Sobieski, shaped after a stirrup for his charge; and the first coffeehouse in Vienna was made using bags of coffee beans left behind by the Ottomans.

Fictional Works Set During the Siege(s) of Vienna Include