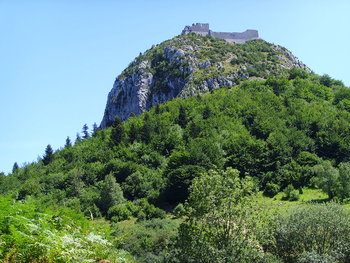 The Cathars (from the ancient Greek katharoi, "the pure ones") were a medieval religious movement of Christian Gnosticism, active in the 11th and 14th centuries around Southern Europe. Still shrouded in mystery, speculations and supposed historical conspiracies, they were a vital part of the landscape of France and Italy until their extermination by Catholic Church, which saw them as competition for both religious and political reasons.

The origin of this movement remains unknown, although it has been traditionally tied to the Bogomils, a 10th century Gnostic sect from the Bulgarian Empire founded by some preacher named Bogomil. A current of social anarchist, Bogomils rejected the regular Christian teachings and replaced them by a creation myth of moderate dualism. According to their doctrine, God had two sons, Sataniel and Michael; the former revolted and created the material world as a prison, enslaving mankind there and founding the Abrahamic religions out of arrogance, while the latter took the guise of Jesus and came to the world to teach humans the way to escape. Bogomils were deeply social, rejecting the cross, any religious hierarchy beyond the rank of teacher, and any temple beyond the human body, which meant it was their duty to travel far and wide to preach and heal the sick. Bogomilism was eradicated in the 13th century by both the Pope and the Ottoman Empire, but they had time to influence religious thought in the south of France and Italy, giving birth to Catharism.

Cathar beliefs, and the main source of differentiation from Catholicism, were basically a modernized version of the Gnostic butter and bread as seen by Bogomils. They believed the cosmos was ruled by two forces, the true God or "Invisible Father" and an evil deity named "King of the World", the latter of which was either identified with Satan or considered his father, creator or corrupter. The material world was a corrupt prison created by Satan, who had warred against God, while humans were actually luminous spirits deceived into leaving God's heaven and inhabiting bodies of flesh. Trapped in matter, the human souls would be forever condemned to suffer under Satan and his whims, reincarnating over and over upon dying without hope to escape. Fortunately for us, the ever cool Jesus had been sent by God to save humans by teaching them the true divine teachings, which would allow us to return to heaven by renunciating the material world and practicing ascetism and celibacy.

Contrary to what is often implied, Catharism was not a strongly organized religion, but a myriad of regional factions that only shared a few central ideological pillars, sometimes varying wildly in the rest of their teachings. They didn't even have a real collective; they only saw them as Christians, the "true" kind of Christianism which had not been tainted by the devil, and therefore they only called themselves "Good Men" or "Good Christians". Catharism was a label given to them by chroniclers, who also called them Albigensis after the city Albi where the movement first took hold. That said, they shared some ranks and sacraments, like a form of baptism called consolamentum, and it's apparent at some point they formed their own ecumenical council of bishops, which was joined by Bogomil representatives.

Thanks to the admiration they caused in peasant and nobles alike for their sobriety, especially compared to the scandalous and dissolute lifestyles of the Catholic clergy, Cathars became highly influential in France and amassed a huge amount of wealth, castles, and prestige, which eventually made the Church feel threatened. When Pope Innocent III realized retaking the spiritual control of the region was impossible, and after the murder of the papal legate (likely for having insulted a powerful Cathar noble), he requested military action and proclaimed the Albigensian Crusade, the usual campaign of massacre and forceful re-conversion. Although Christianity had already their hands busy with the Fifth and Sixth Crusades, King Philip II eventually saw this as a great chance to reassess his political authority over the unruly Languedoc, and when the Pope promised the heretics' lands to all nobleman who joined the fight, the Cathar's fate was decided. The conflict also saw the creation of the Dominican Order and the Medieval Inquisition to help eradicate the heresy.

The Cathars were ultimately defeated with devastating consequences, leading historians to call it a literal genocide; when facing the question of how to tell apart heretics from Christians, the crusade's high commander Amalric would be quoted as "kill them all; let God sort them out". The Inquisition worked on destroying the rebels' ideology until much of the 14th century, punishing with tortures and penitency those Cathars who repented, and burning at the stake those who did not. Indeed, the image of Cathars voluntarily climbing into the fires and perishing while chanting hymns pervived in the time's chronicles. The results were bitter for the winning side too, though, as the conflict had inflated the French crown into making the Papacy dependant on him, which ended up causing the Avignon Papac, and it also decreased heavily the support they all could give to the true Crusades at the time, making them fail.

The legacy of Catharism lived on, turning through centuries into a fountain of legends, spawning theories that they were in possession of the Holy Grail and other conspiracies. You might have come to this page due to Dan Brown's, The Da Vinci Code, where they are claimed to be secret custodians of the bloodline of Jesus and Mary Magdalene - something whose sole concept, ironically, would have infuriated true Cathars.