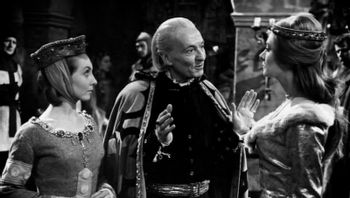 Yes, ladies and gentlemen, it's one of those episodes...
Vicki: Doctor? Will he really see Jerusalem?
The Doctor: Only from afar. He won't be able to capture it. Even now, his armies are marching on a campaign that he can never win.
Vicki: That's terrible. Can't we tell him?
The Doctor: I'm afraid not, my dear. No. History must take its course.
Advertisement:

The one where Ian nearly gets killed by ants.

Written by David Whitaker. This four-episode serial first aired from March 27 to April 17, 1965.

We're back to history once again, as the TARDIS arrives in 12th century Palestine. Barbara is immediately kidnapped, this time by Saracens. Vicki and the Doctor cunningly steal some clothes (with Vicki posing as a boy) and make their way to the English encampment. King Richard the Lionheart (Julian Glover) reluctantly grants Ian the right to ride off and find Barbara — knighting him "Sir Ian of Jaffa" for the purpose.

Another companion of the King, William des Preaux, is posing as Richard in Saladin's court to protect his King. He befriends Barbara, and they both decide to act as if Barbara is Richard's sister, Joanna. This backfires spectacularly because Saladin's brother, Saphadin, has a massive crush on Joanna and immediately knows that Barbara isn't her.

Meanwhile, the Doctor and Vicki stay behind and try unsuccessfully not to get caught up in courtly intrigues. Joanna (hey, it's Jean Marsh!) overhears them saying that Vicki isn't a boy, and although she's amused by the ruse, she refuses to let it continue. Instead, she allows Vicki to be dressed up as a proper lady and the Doctor to become her confidante, eager for some friendship in these lands.

Barbara flees from Saphadin's men and is eventually sheltered by a man named Haroun, whose daughter Maimuna has been kidnapped and raped by El Akir (The Dragon in Saladin's court). Haroun lives for revenge, and has hidden the fate of Maimuna, as well as the death of his wife and son at El Akir's hands, from his other daughter Safiya. While Haroun sees his chance to finally kill El Akir, he leaves Barbara with his trusted knife and tells her to kill Safiya and herself if they are captured by soldiers.

El Akir almost immediately subdues Haroun, who doesn't stand a chance without his knife. Barbara makes a brave stand, but is dragged off to El Akir. She escapes again and hides in the harem, where she meets the traumatised Maimuna.

Meanwhile, Ian gets Trapped by Mountain Lions in the form of some hungry ants and an Ineffectual Sympathetic Villain named Ibrahim. He convinces Ibrahim to steal them some horses and help him get into Saladin's court. They invade the harem just in time to witness Barbara's betrayal to El Akir at the hands on one of the harem women, Fatima, in exchange for a ruby ring. After a quick battle, Haroun is reunited with Maimuna, and Fatima has to face the revenge of the other women.

In the middle of all that, the Doctor and Vicki discover that King Richard plans to marry Joanna off to Saphadin to form a pact. Joanna obviously has a serious problem with that, and after a roaring speech to him, treatens to involve the Pope if Richard goes through with it. Richard is led to believe that the Doctor and Vicki are the ones who told Joanna of the plan — and although it's revealed to all that the Earl of Leicester is actually the one who told her, the Doctor and Vicki wisely decide to flee the court.

They meet up with Ian and Barbara outside the TARDIS, where Ian pretends to a group of soldiers that he's captured the Doctor, and the entire group vanishes into the TARDIS.

The only serial from Season 2 that's partly lost (unless you count the unreleased four-episode cut of ''Planet of Giants''), though audio recordings of Episodes Two and Four exist. The only known copy of the first part also had a very large physical scratch in it, which despite the best efforts of the BBC is still noticeable even in the DVD releases.