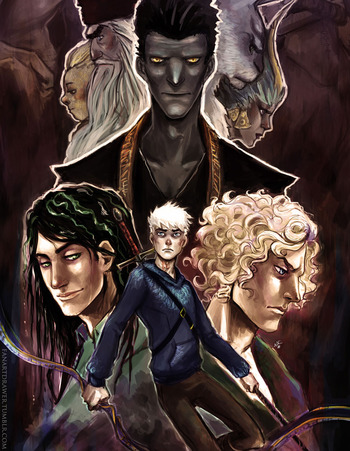 This is the quality of fanart that this series inspires.

"...there is far more in this world than just my darkness."
— Pitch Black
Advertisement:

From The Darkness We Rise

and its sequel, Into Shadows We Fall

, can be summarised as explicit slash fics about Jack Frost and Pitch Black.

This would, however, be an entirely inadequate summary.

Twenty two years have passed since the defeat of Pitch, and Jack lives alone, touch-starved, with only the company of a solitary Nightmare. One evening the Man in the Moon sets him on a path that will lead him to unexpected relationships, draw the attention of the Guardians to a new coalition of villains, and challenge Jack's every notion of what it is to be good, evil, and what it is to live in the shadows.

This is the author's summary, which is much better.

Many of the original supporting characters have gotten a Spin-Off series of their own, Fae Tales

Tropes featured in Shadows And Light include: