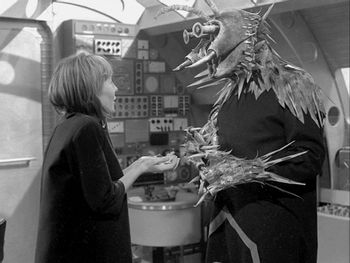 The one where the TARDIS Team plays Scooby-Doo.

The Doctor, with Ian and Barbara still in tow, arrives on the planet Dido some time in the 25th century. The planet is home to a crashed Earth spaceship, with two survivors on board: the paralysed Bennett and the young orphan Vicki. Both are fearful of a native monster called Koquillion, who has apparently killed the other members of the expedition.

Ian and Barbara soon run into Koquillion, and the Doctor explains that despite Koquillion's spiky exterior, the natives of the planet are extremely friendly. This one isn't, though, but before the Doctor can investigate, he and Ian are unceremoniously placed in a Death Trap. With a rabid beast lurking below.

While they escape, Barbara is hidden by Vicki, and tries to come up with a plan. Vicki keeps trying to reassure her new friend that a plan won't be necessary, since the rescue crew is due to arrive in a few days. But Barbara doesn't want to wait that long and goes off to find her friends, shooting the rabid beast in the process... only to discover that it was Vicki's tame pet, the only close friend the girl had left in her life.

The Doctor mediates between a very distraught Vicki and his humans, and decides to have a good long talk with Bennett. He finds out that Koquillion is in fact Bennett in disguise (he's not really paralysed, of course), and he has killed the other crew members in order to conceal a murder he committed earlier. He's also been killing the native Didonians, and believes he has in fact wiped them out — but a confrontation with two Didonians causes him to fall to his death from a high cliff. The Didonians have had enough of outsiders for a very long time, so they make sure the rescue team never arrives. It doesn't need to, since the Doctor misses Susan so much that he agrees on taking Vicki along.