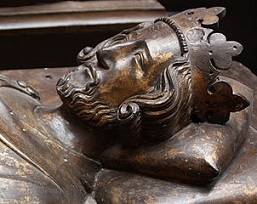 Henry III (1216-72) was king of England and son of King John of England. He is remembered as a man of pure morals and a patron of arts and architecture (he rebuilt Westminster Abbey).

But he was an autocrat like his father. His dreams of reclaiming the Angevin French possessions caused radical elements of Parliament to rebel and forced him to sign the Provisions of Oxford which put more limits to his power than the previous Magna Carta.

But what started as a reform movement turned into a coup. Henry was imprisoned and the "reformers" took charge. Henry's son Lord Edward escaped and eventually defeated the reformers. The rest of Henry's reign was uneventful except for the fact that Edward was by then ruling the country in all but name.

He once survived an assassination attempt when assassins came to his chambers to kill him...

because he was having sex with the Queen in her chambers and thus wasn't in his at the time.