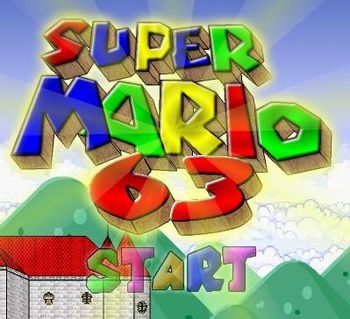 "Long ago, the Mushroom Kingdom was ruled by Tyrants, people who enslaved and ruled their people with an iron fist. The only person who could stop them was a Hero, someone who defeated the rule of the tyrants and thusly ended their unwanted rule. He then proceeded to seal away their power into an orb, the Orb of Power, which the new Dynasty of Toadstools then hid with the power of the Shine Sprites. And so it was good.

And yet as time passed, and life became more peaceful, people forgot about the whereabouts of the Orb of Power. They could not tell if it was even below their very feet. Why, not even the current princess knows. And yet, there is someone out there who does...."

Cut to the present. Mario is heading to a party in his honor, celebrating the day he defeated Bowser (the first time, at least). As he appears, suddenly Bowser and his crew find their way to the castle, immediately bombarding it with his troops. Mario valiantly fights, but eventually falls. Hours later, he finds that the world had gone dark. And there appears to be something glinting amidst the gloom...!

So begins Super Mario 63, Runouw's fan-made Flash version of the classic game Super Mario 64, that also contains elements of Super Mario Sunshine and Super Mario Galaxy. Even though it doesn't have as many game mechanics as either 64 or Galaxy, it does have Sunshine's FLUDD, capable of doing various tasks depending on the nozzle that it currently has. Be advised, though, even if you do manage to get a FLUDD extension, it'll still be tricky to get through the game without either trying multiple times or otherwise finding things that you weren't supposed to before.

Has nothing to do with Rule 63.