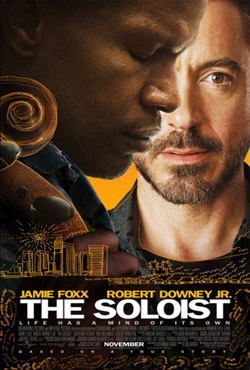 "To be there with him is and see the way that he sees the world is to be transported. I mean, I have never loved anything the way that he loves music."
— Steve Lopez
Advertisement:

The Soloist is a 2009 drama film directed by Joe Wright, and starring Jamie Foxx and Robert Downey Jr.. It is based on the book of the same title by Steve Lopez. Steve Lopez is also the main character of the film, and the film essentially chronicles the events which supposedly led to the writing of the book. Both the film and the book are based on the true story of Nathaniel Ayers, a musical prodigy who developed schizophrenia and became homeless.

Lopez (Downey) is a journalist working for the L.A. Times. Due to a decline in the reading of newspapers by the youth, the industry is floundering, and Lopez needs to find and write a good story quickly. Idling about in search of one, he happens across Ayers (Foxx), an apparently mentally-handicapped homeless man playing transfixing music on his violin — despite the fact that the said violin has been worn down to just two strings. Lopez is astonished to learn that Ayers once attended Juilliard. Seeing an opportunity for a story in the form of someone so talented attending such a prestigious school only to wind up on the streets, he contacts Ayers' sister and learns that he dropped out of the school and became homeless due to hearing voices in his head that prevented him from playing in front of an audience. Initially, Lopez sees Ayers only as a source for a story, but through his interactions with him their friendship blossoms and he starts attempting to get Ayers off the street and triumph over his illness.