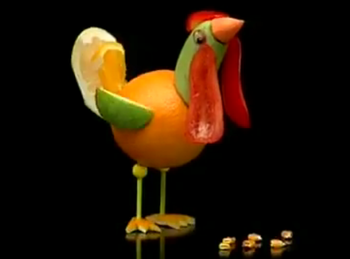 We don't get it either.
"Soupe Op-é-ra!"
Advertisement:

Really weird French Stop Motion TV show, created by Marlou Films, which ran from 1991 to 2000. In each episode, fruit appears in a basket in a black, empty room. Then an opera woman sings "Soupe Opéra!". This sets off the Background Music, which is made up of very '90s drums with assorted weird noises. Then the fruit starts moving, cutting itself up to form animals. Once assembled, they perform an action, like eating the food or making even more weird noises. This repeats four times throughout the episode. There's no other plot.

. And believe us, it has to be seen to be believed.

The series was also shown on Cartoon Network in the United States and Latin America as part of their Small World block from 1996 to 2001. However, no USA recording has ever resurfaced online, but some Latin American recordings have.

Not to be confused with a Soap Opera, although that may be where the show gets its name.