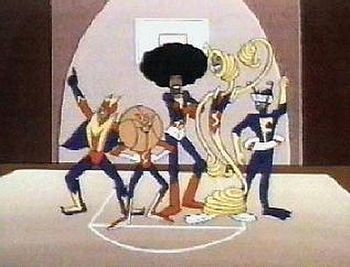 The Super Globetrotters is a spinoff of the The Harlem Globetrotters animated cartoon, produced by Hanna-Barbera for NBC. It ran for 13 episodes in 1979.

The premise of the show is that five members of the Harlem Globetrotters are secretly superheroes. When trouble arose, they would enter portable lockers, then transform into their super-powered forms and fly into acton. The team consisted of:

Not surprisingly, the team fought various super-villains, and the confrontations would invariably be settled with a basketball game between the two sides. Some of the powers and costumes were taken directly from Hanna-Barbera's earlier The Impossibles.