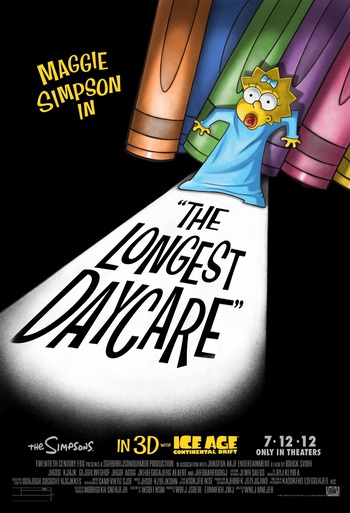 Maggie Simpson in "The Longest Daycare" is a 2012 animated short based on The Simpsons, released theatrically between the show's 23rd and 24th seasons. Written by some of the show's top writers, including Matt Groening himself, and directed by David Silverman, it is the first Simpsons cartoon short to be created for a theatrical release and the second Simpsons film overall, following The Simpsons Movie.

After Marge drops Maggie off at daycare, she is judged to be of "average intelligence" and placed in the dank, depressing "Nothing Special Room" rather than the cool "Gifted Room". With nothing else to stimulate her, Maggie takes notice of a caterpillar. At the same time she meets her regular nemesis, Baby Gerald. Baby Gerald is whacking butterflies with mallets and posting their mangled corpses up on the wall. After she finds a book about the life cycle of the butterfly and figures out what the caterpillar is about to turn into, Maggie decides to save the butterfly from Gerald.

The cartoon was shown theatrically in 3D, preceding Ice Age: Continental Drift, with nearly every review praising it over the feature. It was nominated for a 2013 Academy Award for Best Animated Short Film, but lost to Paperman.

Following Disney's 2019 acquisition of Fox and, with it, the Simpsons franchise, a second short was made, Playdate with Destiny, to show before Onward.