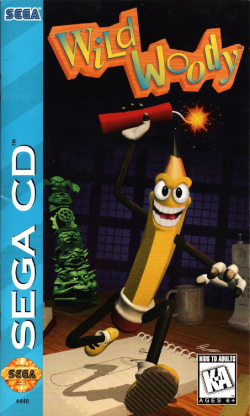 This cover is already an innuendo, how was this rated kids to adults?!
Advertisement:

Wild Woody is a Platform Game that was released by Sega of America for the Sega CD in 1995.

A man brings a totem pole home with him, which turns out to have the power to destroy the universe, but only if many extremely specific conditions are met: it has to be the third Wednesday of July, there has to be a full moon, and there must be snow falling. By coincidence, all of these things end up happening at once (a nearby snowglobe being enough to satisfy the "snowfall" condition), causing the entire universe beyond the room to disappear and the totems to come to life. Each head enters a different picture within the room and turns it into their own personal universe, with the exception of Lowman, the lowermost head on the pole and the token good guy of the totem's heads. To retrieve his evil brothers to prevent them from causing too much trouble, Lowman brings a pencil of all things to life. The pencil, named Woody... WIIIIIIIIILD Woody.. complies with the order he is given, and sets off to find the totem heads.