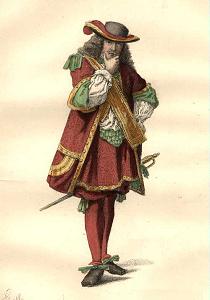 The Misanthrope, or The Malcontent in Love (Le Misanthrope, ou l'Atrabilaire amoureux) is a 1666 comedy of manners by Molière, written in the typical Alexandrine verse note a line of twelve syllables, with a strong caesura (or pause) in the middle, roughly equivalent to the English iambic hexameter of the French classical drama. Alceste, the title character, looks down on the society, believing it hypocritical and disdaining the false compliments which are considered polite. Unfortunately, the very qualities which are horrifying to him are exemplified in Célimène, the woman he loves.

Some Hilarity Ensues, but the play also seriously points out human flaws.

For the general trope on misanthropy, see Hates Everyone Equally and Misanthrope Supreme.

The Misanthrope provides examples of: