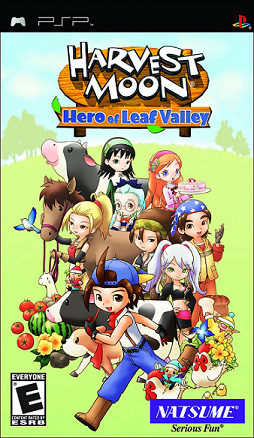 Harvest Moon: Hero of Leaf Valley (牧場物語シュガー村と皆の願い Bokujō Monogatari: Sugar Mura to Minna no Negai, lit. "Ranch Story: Sugar Village and Everyone's Wish") is a 2009 installment in the Harvest Moon (now known as the Story of Seasons) franchise for the PSP. The game is essentially a remake of Save the Homeland, taking the plot, style and format of the original and greatly expanding them: marriage is reintroduced to the game, mining as added and plays out as a puzzle minigame, new characters are added including the Funland executives themselves, and there are more ways to save the village. The town's size has been condensed to fit the PSP's memory, making getting around the town much faster, and the loading times are short. However the controls have also been criticized, particularly in close quarters; the game is bad at prioritizing animals, objects on the ground, doors, etc. when using your action commands. Get used to trying to pick up an egg and instead picking up a chicken or walking out of the coop.

The Player Character (named whatever you like) arrives in Leaf Valley after his grandfather Gus's passing. While initially there to collect Gus's possessions from his rundown farm, the player runs into the Harvest Goddess and the Harvest Sprites, who are surprised to find that he can see them. They tell him that the Funland Company plan to tear down the town and turn it into an amusement park, and they task him with fixing up the farm and saving the town with the help of the townsfolk.

Later the player meets the executives of Funland: an ersatz-Team Rocket trio of Alice, the cocky Tsundere CEO; Charles, the egotistical Bishōnen Jerkass; and Renton, the rodent-looking Nice Guy. They give the player the chance to gather 50,000G in two years to buy back Leaf Valley's land deed. It is up to the player to stop Funland by collect all of the money, or to work with the villagers to turn the village into either a tourist spot or a nature reserve. However the Funland trio aren't going to sit idly by and will hamper your progress with... self-destructing robots.

The game has Multiple Endings depending on whether you have the money at the end of the second year or not (if you don't, you will need at least three of either the Tourist Spot or Nature Preserve events), and whether you stop some, all or none of Funland's robots. You can then proceed into a Playable Epilogue from Year 3-on, or you can go back to Year 1 and attempt to complete any of the villager's stories you missed.