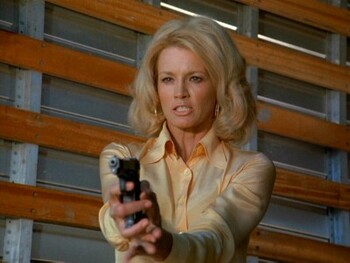 Police Woman is a Cop Show that ran for four seasons (1974–78) on NBC, starring Angie Dickinson as Sgt. Suzanne "Pepper" Anderson, a vice detective with the LAPD. It was one of the first drama series on American network TV with a female lead, and the first case of a woman police officer playing the same part as her male colleagues. It was a Spin-Off from Police Story (1973).

In 1975, Angie Dickinson won a Golden Globe Award for Best TV Actress for her part in the series.