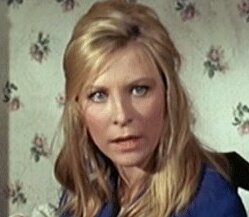 Patricia Franklin, (11 September 1942), is a British actress best known for her roles in the Carry On... Series.

After leaving RADA, she spent nine months appearing alongside Joan Sims, Peter Butterworth and Nicholas Parsons in Uproar in the House in the West End. Carry On... Series producer Peter Rogers was in the audience and was so impressed with her that she was offered a part in the next film, Carry On Camping as a farmer's daughter. She would go on to make a further four appearances in the films.

Franklin also appeared in all three films in the Three Flavours Cornetto Trilogy, and has continued to appear on TV and in films coming into The New '20s.

She is married to dramatist Frank Hatherley and the two have three children.