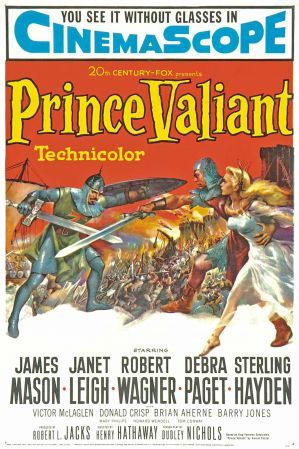 Prince Valiant is a 1954 adventure film in Technicolor and Cinemascope, directed by Henry Hathaway and starring James Mason, Janet Leigh, Robert Wagner, Debra Paget, and Sterling Hayden. The film is based on the syndicated newspaper comic strip of the same name by Hal Foster.

The usurper Sligon, along with other rebel Vikings, forces the exile of the Christian royal family of the Viking kingdom of Scandia: King Aguar, his wife, and their son Prince Valiant (Wagner). Aguar and his family come under the protection of King Arthur (Brian Aherne). When Valiant has grown up, he is sent to Camelot to undergo training under the tutelage of Aguar's family friend, the noble knight of the Round Table, Sir Gawain (Hayden), to become a knight in King Arthur's Court and restore his exiled father to his rightful throne. Along the way, he must face a Black Knight who's allied with Sligon's Vikings, and finds time out to fall in love with the beautiful Princess Aleta (Leigh).