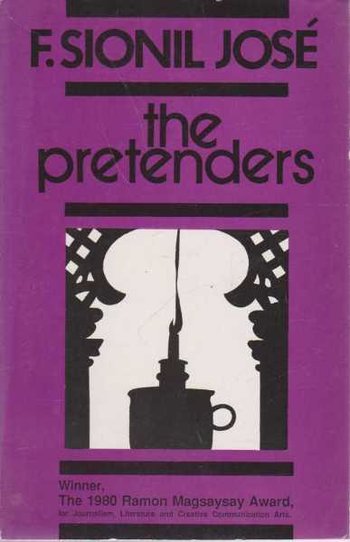 "… They were bright young men who knew what money meant. But though they were rich and were educated in the best schools of Europe, their horizons were limited and they knew they could never belong to the alien aristocracy which determined the future.… They cried for reforms, for wider opportunities, for equality. Did they plead for freedom, too? And dignity for all Indios — and not only for themselves who owed their fortunes and their status to the whims of the aristocracy? Could it be that they wanted not freedom or dignity but the key to the restricted enclaves of the rulers?"
— Antonio "Tony" Samson, The Ilustradosnote the Filipino intellectual class, usually from wealthy colonial-era families.
Advertisement:

The Pretenders (1962) is a historical novel by award-winning Filipino novelist F. (Francisco) Sionil José, the first of what would become one of his most famous bodies of work, the five-volume Rosales Saga, named after the provincial Philippine town he grew up in.

Somewhere in the late 1950s, Antonio "Tony" Samson returns to the Philippines after finishing his doctorate at Harvard University. He comes home to a highly unequal society, restless in the wave of reconstruction after World War II, and gets engaged to and marries Carmen Villa, heiress to a wealthy industrialist Filipino family. This puts him in something of an identity crisis, as Tony himself hails from a poor family in Pangasinan province (specifically Cabugawan, a tiny rural community), and his own blood relations constantly remind him of their continuing struggles and the debt he owes to them for enabling him to study in the United States.

As if things weren't complicated enough, however, Tony also has to deal with the fallout of an affair he had in youth with Emy, his poor cousin, whom it turns out he left pregnant, and now has a son. This, and other issues, continue to weigh on him throughout the novel, eventually forcing him to drastic action.

Not to be confused with the new wave band.

Tropes Appearing in The Pretenders: