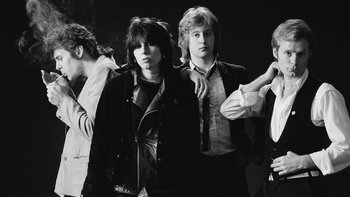 The Pretenders' original lineup. L-R: Pete Farndon, Chrissie Hynde, James Honeyman-Scott and Martin Chambers.
Got brass in pocket,
Got bottle I'm gonna use it,
Intention I feel inventive,
Gonna make you, make you, make you notice.
"Brass in Pocket"
Advertisement:

Pretenders are an English-American Alternative Rock band that emerged during the New Wave scene, formed in 1978, and whose most famous lineup is made up of vocalist Chrissie Hynde, James Honeyman-Scott on guitar, Pete Farndon on bass and Martin Chambers on drums. Their first Self-Titled Album, from 1980, is often considered one of the foundation bricks of Alternative Rock as we know it.

Despite losing their guitarist and bassist at the peak of their success, the remaining living members went on with the band and released some more albums, got more singles on the charts... While at the same time changing members like one would clothes.

The original lineup of the Pretenders were inducted into the Rock and Roll Hall of Fame in 2005.

Not to be confused with the Filipino novel The Pretenders.

"Back on the Trope Gang":

"I'm thinking of the fireworks
That go off when you smile"