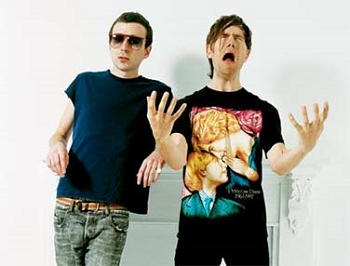 Kim and Julian. They're a bit odd.
Advertisement:

The Presets are an Australian dance duo, though labelling them simply as dance is not doing them justice.

Kim Moyes and Julian Hamilton met at university, where both were studying classical music. They both had an interest in dance music and set about creating some of their own. They were inspired by the energy of rock music that was popular at the time, and wanted to infuse that energy into dance music.

In 2003, they released a six-track EP called Blow Up which gained much acclaim despite its limited release. On the success of Blow Up they released their first studio album, Beams in 2005 which gave the singles "Down Down Down", "Are You The One", "I Go Hard, I Go Home", and, most notably, "The Girl and the Sea", which would be featured on an episode of The O.C..

Beams was well-received, though many critics pointed out the strength of the singles and the tendencies for the other songs to act as simple filler. The Presets themselves have semi-acknowledged this, admitting that "if it sounded fucked up, we loved it and didn't really care about anything else."

In 2008, however, the duo released an album called Apocalypso. It was an absolute monster album in Australia, and received with near-universal critical acclaim, making them household names in their homeland. The album debuted at #1 on the charts, achieved gold certification in two weeks and went on to achieve platinum status soon thereafter. It then went on to win "Best Dance Release" and "Album of the Year" at the ARIA awards (Australia's answer to the Grammies).

The following year, the duo began work on their next album, working on as many as 30 songs that mostly came to fruition towards the end of 2011. This work was then finished and released in fall 2012 as Pacifica, which opened to good reception and was preluded by the singles "Youth in Trouble" and "Ghosts" (which was featured on the soundtrack of FIFA 13), which were released at the start and end of the summer preceding the album's release.

The duo are also well regarded as being very down-to-earth Aussie blokes, despite their growing success. They have expressed frustration that most interviewers only use their Wikipedia page to find out information on them beforehand.

This duo contains examples of the following tropes: