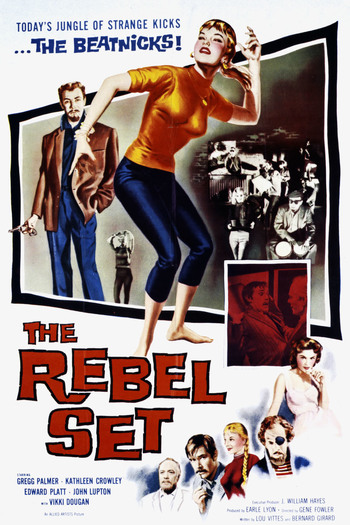 Tucker: My plan hinges on the interesting fact that if you take a train from Los Angeles to New York, there's a four-hour stop-over in Chicago.
John: What's so interesting about Chicago?
Tucker: Any town where you steal a million dollars is interesting.
Advertisement:

The Rebel Set is a low-budget 1959 crime thriller directed by Gene Fowler Jr. (I Was a Teenage Werewolf).

Three down-on-their-luck beatniks — John Mapes, an aspiring actor; Ray Miller, a failed writer; and "poor little rich boy" George Leland, the neglected son of a famous movie star — are hired by an amoral coffee house proprietor to help pull off an armored car robbery during a rail trip. The heist goes off swimmingly; but afterward, on the train to New York, the conspirators begin dying, one by one.