Film / The Trouble with Harry 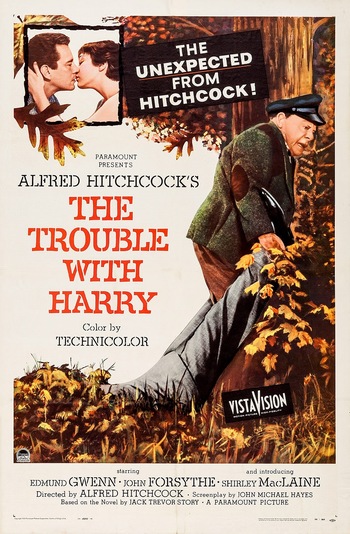 Over the years, Alfred Hitchcock gave the world such thrillers as Rebecca, Psycho, and The Birds. He also gave us this 1955 Black Comedy, adapted from Jack Trevor Story's novel of the same name.

The residents of a small Vermont town are faced with the appearance of one Harry Worp. The trouble with Harry is that he's dead. Four people in particular are concerned with what to do with him: Jennifer Rogers (Shirley MacLaine, in her film debut), the dead man's long-estranged wife; retired sea captain Albert Wiles (Edmund Gwenn), who thinks he shot Harry by accident while hunting; spinster Ivy Gravely (Mildred Natwick), who hit Harry in self-defense after he attacked her; and local artist Sam Marlowe (John Forsythe), who never actually met Harry, but is interested in Jennifer. The rest of the movie is spent trying to figure out exactly why he's dead, and more importantly, what to do with the body.

This film was initially a box-office failure but has since become well regarded. It's also notable for its music score composed by Bernard Herrmann, his first of several for Hitchcock. And Jerry Mathers of Leave It to Beaver fame appears as Jennifer's young son Arnie, who's the first to discover Harry's body in the woods.

Not to be confused with The A-Team episode of the same name.