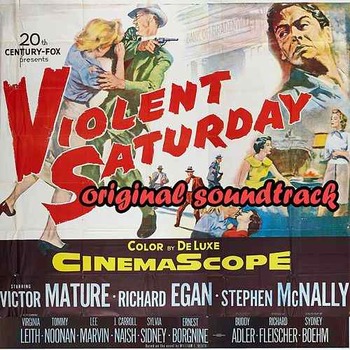 Violent Saturday is a 1955 American Film Noir crime film directed by Richard Fleischer and starring Victor Mature, Richard Egan, and Stephen McNally. The film, set in a mining town, depicts the planning of a bank robbery as the nexus in the personal lives of several townspeople.

A number of otherwise insignificant small-town stories erupt into drama when a gang of hoodlums decides to rob the local bank. A father looking for pride in his son's eyes, a timid bank manager who is a peeping tom by night, a man striving to re-win his wife's love, an Amish farmer faced with viciousness, and a proper older woman turned thief, all find themselves entangled with the bank robbers as a peaceful weekend turns violent.