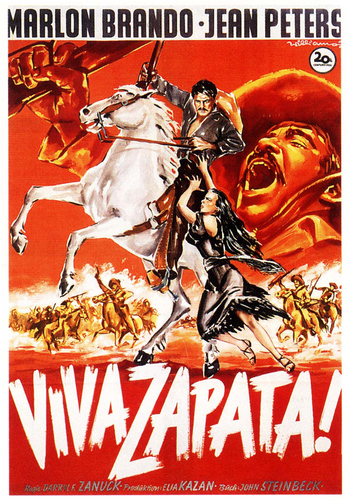 Emiliano Zapata (Brando) is a peasant farmer from the southern Mexican state of Morelos. He and his fellow peasants petition President Porfirio Diaz for assistance against the sugar barons that have taken their land, but Diaz, a corrupt autocrat, instead tries to have Zapata arrested. Zapata, accompanied by his brother Eufemio (Quinn), lead a peasant revolt and raise an army. Other rebels rise up, including Pancho Villa in northern Mexico, and Diaz is forced to flee the country.

Diaz is replaced by Francisco Madero, a liberal, but Zapata is unsatisfied by the pace of Madero's reforms. Things get worse when conservative general Victoriano Huerta pulls off a coup d'etat and has Madero murdered. Zapata gathers his men once again, and, working in tandem with Villa, is able to overthrow Huerta as well. Zapata briefly holds power in Mexico, but fears that power may corrupt him.

Star-Making Role for Quinn. John Steinbeck wrote the screenplay, the only original screenplay he ever wrote (he also adapted his own novel The Red Pony, and he wrote the original story for Lifeboat). Alfred Newman composed the music. Alan Reed, who appears briefly as Pancho Villa, would later voice Fred Flintstone on The Flintstones. Jean Peters, who stars as Love Interest Josefa, retired from acting a few years after this movie when she married Howard Hughes.

Compare Viva Villa!, a movie made 20 years before with a similar title and recounting many of the same events, but from Pancho Villa's POV.