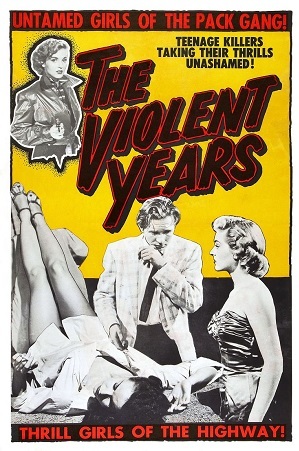 "(An Easter Egg shows) a condensed version of every man's fantasy from THE VIOLENT YEARS... IT DOESN'T HAPPEN—GET OVER IT!"
— DVD Drive-In review

The Violent Years is a 1956 film bringing us the story of one young Paula Parkins. She has it all on the surface... money, things, a lovely house, beauty and youth. However, the movie posits, she lacks the most important thing: true parental attention.

This lack of attention means that Paula must naturally turn to crime to get satisfaction with life. She forms a girl gang with three friends and they end up knocking over gas stations. Eventually they're forced to switch targets, and ultimately Paula seeks greater fare. And boy, does she (and her friends) get it.

The Judge's "The Reason You Suck" Speech also provides the intro samples for the Ministry song "So What".