Creator / Will McRobb and Chris Viscardi 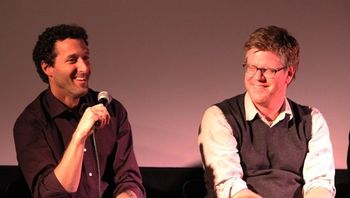 Chris Viscardi (L) Will McRobb (R)
Will McRobb (July 2, 1961-) & Chris Viscardi (January 14, 1962-) are a pair of writers, probably best known for their work with Nickelodeon throughout the 1990s and, more recently, for writing big-screen adaptations of books and franchises.
Advertisement:

The two got their start in the late eighties, as part of Nickelodeon's advertising division. Rather than take a direct route and outright pitch the network to viewers, they devised a series of shorts about two brothers who shared a name and had vaguely weird adventures together. The shorts would end with the Nick logo and hopefully kids would be amused enough by the shorts to want to watch the network's long-form programming. Said shorts were known as The Adventures of Pete & Pete, and worked so well that eventually Nick began commissioning half-hour specials. Five specials aired between 1991 and 1993 before the two started getting full season orders. While this was happening, McRobb became an assistant script editor for Doug and The Ren & Stimpy Show, even writing a few episodes of the latter. Pete & Pete lasted three seasons before finally ending in 1996.

It was just as well, because as Pete & Pete began winding down, McRobb and Viscardi—as well as Robert Mitenthal, the mind behind Nick's Double Dare—had been working on a second series, a cartoon anthology known as KaBlam!. It was part anthology series, part sketch show, intended to showcase styles of animation besides the traditional form that occupied the entire rest of Nick's cartoon programming. Each week would showcase four shorts, all part of an ongoing series, as well as a few miscellaneous ones and the occasional music video.

2000 brought an eleven-year streak to a halt as KaBlam came to an end. Their final work for Nick during this time was the film Snow Day, originally written as a Big Damn Movie for Pete & Pete, but was rewritten into a wholly original script when Nick wasn't interested in doing anything with the show. The same year, the duo created the series The War Next Door for USA Network; this was cancelled in its first season with five episodes left unaired. The two co-wrote an episode each for Brutally Normal and Ed, and a TV movie called Robinson's Greatest Hits, before McRobb split off with Douglas McRobb to create Radio Free Roscoe for what was then The N.

The two reunited in 2005 to collaborate on an episode of Nick's The Naked Brothers Band. From 2007 to 2008, the duo adapted Alvin and the Chipmunks, The Tale of Despereaux, and Angus, Thongs, and Full-Frontal Snogging for the silver screen. In 2009, the two created a series for TeenNick—formally The N—called The Assistants, which lasted a grand total of two months. In 2012, the two helped develop the webseries Bravest Warriors and served as executive producers for one season. The two returned to Nickelodeon proper as writers and executive producers on the show Sanjay and Craig in 2013. They also did the short Planet Claire for the Nickelodeon Animated Shorts Program.

In 2015, Chris Viscardi was given the title of Senior Vice President of Content Development for Nickelodeon.