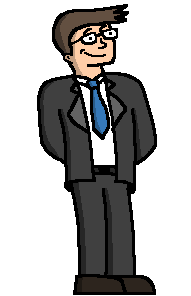 Art of Detective jakkid166, his self-insert and usual main character

Originally a trollfic author, starting with with a series of trollfics based on the Ace Attorney franchise, jakkid later went on to evolve his style into a more straight sort of spoof comedy with his "Detective jakkid166 in Equestria" series of stories, creating a brand of comedy not really seen much in Fanfiction in the past. By this point he's managed to gain a small amount of traction in the fanfiction community, solely based on how ridiculous his fanfictions are. He's had a multitude of dramatic readings, fanfics by other authors based on his style, a wiki, and even a fangame made, all based on his inane writing.

Though his writings initially started out as generic badly-written stories, jakkid later developed his own style that sets himself apart from "trollfic" authors in many ways. While trollfics are often written so that unsuspecting people can enjoy them from a So Bad, It's Good perspective, jakkid takes it a step further by instead using the format as a way to insert actual thought-out humor into every possible aspect of a fanfiction. This, in itself, allows him to get across a rapid-fire brand of humor that wouldn't work in any other format - almost every line contains a joke of some kind. Some of his stories have been described as having "better beats and narrative drive" than even some seriously-written works, also being noted as "garbage, but well-crafted garbage".

Jakkid's stories generally have little rhyme or reason to them, yet still generally maintain a coherent plot. His humor is largely derived from a sort of absurdist humor based on a lack of consistency nor logic in his characters' actions, taking place in a universe where most people are either complete jerks or just incompetent. To top it off, all of it is played almost completely straight.

Most recently, he writes fanfictions about his self-insert, "Detective jakkid166", doing god-knows-what in the world of My Little Pony: Friendship Is Magic, hosted on FIMfiction.net. These stories are his current "main series" and the best representation of his style, whereas his Ace Attorney stories (hosted on Fanfiction.net) are more akin to simple trollfics - though still with some entertaining aspects to them.

These fanfictions provide examples of: