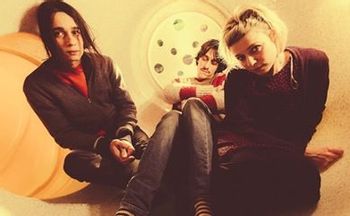 Verdena are an Italian rock band from Albino, Bergamo. They consist of brothers Alberto (vocals, guitar) and Luca Ferrari (drums) and Roberta Sammarelli (bass), but they're often joined by a keyboardist while they're on tour to provide backing vocals and additional instruments.

Formed in 1995 when they were teenagers under the name Verbena, they eventually changed its spelling when they found out an American band was already called like that. Their first, self-titled album was released in 1999, showcasing a heavy grunge and alternative rock influence and, unusual for an Italian band, a fondness for mind-screwy lyrics which hardly, if ever, made sense - the focus being mainly on the sound and images provided by the words, often leading to bizarre results, though they've gotten a bit less abstract with time.

Throughout the years their music has evolved enormously and unpredictably, going from a straightforward approach to an increasingly layered and complex sound which bloomed with ''Wow'' in 2011, a double album that arguably marked a transition from being an alternative cult band to reaching a wider audience without selling out.